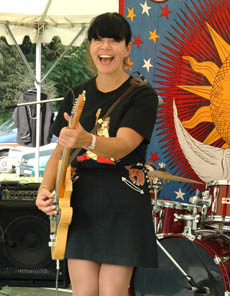 Diana Quinn and Mike Woods, award-winning musicians from the area, present their top-notch songwriting, playing and singing as an acoustic rock duo.  Their repertoire includes a wide and extensive variety of material, including standards, classic country, rockabilly, and 60s rock.  Accomplished and funny, Diana and Mike play a mix of originals, such as Your Trailer or Mine? and Road Kill Stew, as well as some of their favorite songs by artists such as Johnny Cash, Patsy Cline, the Beatles, and Elvis.

Diana & Mike are veterans of the DC music scene; they front the well-known retro country band Honky Tonk Confidential as well as the 60s girl group tribute band The Fabulettes. Mike’s standout guitar-playing and Diana’s singing and songwriting have won them many of the Washington Area Musicians Association’s top honors, as well as acclaim from critics around the world.  Their songs are in continuous rotation on XM Satellite Radio and their anthemic “That’s Nats” is played at Washington Nationals games as well as sports radio and television stations.  Diana’s “Nolan Ryan, A Hero” is being performed by symphony orchestras throughout the country this summer as part of a special American Baseball series.

Diana & Mike have performed in every major venue in the area, including The Kennedy Center, Washington Monument on the 4th of July,  Barns of Wolf Trap, Birchmere, IOTA, Carter Barron, and the Strathmore. Venues outside DC, including the Corning Museum of Glass (New York), Capital City Barn Dance (Richmond) , Twangburgh (Pittsburgh), Hogs and Heifers (NYC), Downtime (NYC), Seafood Festival, Bluemont Fair, and the National  Folk Festival.

Their discography includes HTC’s eponymous first CD, which won a Wammie for Debut Album of the Year.  HTC’s second CD, Your Trailer or Mine? won four Wammies, including Album of the Year and Best Country Album, and the group has won Wammies for Best Country Band and Best Country Duo/Group.  A Christmas album of original songs will be officially released in October.  HTC has started recording another album of original music, and plans to release its Live at the Strathmore: A Tribute to Roy Clark later this year.

Diana and Mike also have cuts on: Greetings from the District of Country, Triple Play, Nolan Ryan Tribute, Night of 100 Elvises, a Hannukah Feast, and Feast II, IV, V, VI and VII.

SEE WHAT THE CRITICS SAY

DIANA & MIKE AT A GLANCE